"Franco the Great" known as the "Picasso of Harlem" famous artist is internationally known also for his New Art form. Painting on metal gates for storefronts 125th street in Harlem is unofficially known as "Franco's Blvd." (For his contribution to Harlem). His work can be seen in Africa, Japan, France, Central America, Canada, Spain and Brasil. Franco welcomes the world, to his creation on steel gates. 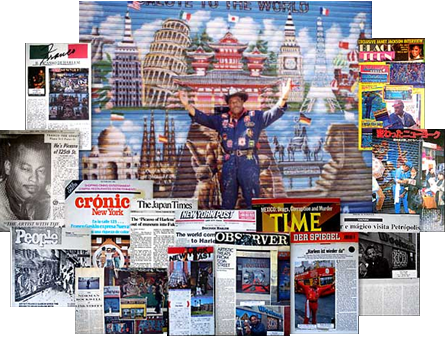 For New York street artist Franco Gaskin, known to his collectors as Franco the Great, his canvas is often one of the many steel security gates that protect the storefronts all along 125 Street in Harlem. His goal is to paint his way across the area's main shopping thoroughfare, from "river to river" beautifying the neighborhood and creating a vast outdoor art gallery. So far, he has painted over 100 gates.

Mr. Gaskin is known to New Yorkers and out-of-towners, and has attracted tourists and tour groups to Harlem for years (he is a regular stop on the Manhattan tour conducted by a number of European travel agencies). Most of his commission work comes from Japan, where he has been invited 15 times by gallery owners, arts councils and department stores.

Also a trained magician, the artist often combines magic and painting to entertain passersby. To see him in action, it's best to catch up with him before 8:30 a.m. - ahead of shop owners arriving to roll up their gates and open for business- or at end the day when the stores are closed.